Lukas Jutkiewicz scored his fiftieth goal for the Club when he hit the back of the net during Blues’ 2-1 victory over Reading.

The striker marked fifty goals in true trademark fashion, a back post header, leaving the goalkeeper with no chance and Jutkiewicz joining an illustrious group of players who have accomplished the same feat.

Since signing for Blues, initially on loan in 2016 and then permanently in 2017, Jutkiewicz has comfortably hit double figures in all but one of his four full seasons at St. Andrew’s Trillion Trophy Stadium, becoming a fan favourite in the process.

The landmark celebration shirts are priced at £275 each, with a £5000 donation being made to Blues’ Charity Partner, The Mustard Seed Project as a part of the celebrations.

We expect the limited-edition shirts to be in high demand, purchase yours now to avoid missing out on this fantastic piece of Blues history. 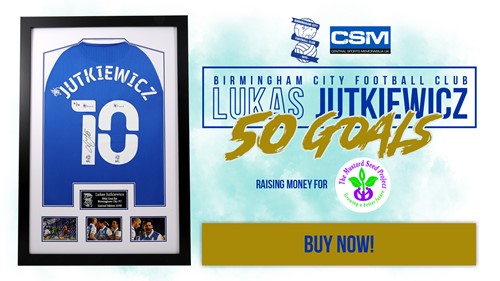