On This Day: Blues win the Carling Cup

To mark the ten-year anniversary of Blues’ underdog triumph, BCFC.com looks back on the greatest day in the Club’s recent history.

Sunday 27 February 2011 will forever go down in folklore as the day Birmingham City Football Club upset the odds to end a 48-year wait and win their second major trophy. The opposition at Wembley was an Arsenal side who sat second in the Premier League, 14 places above Blues, and had earlier that month beaten Barcelona in the home leg of their UEFA Champions League knockout tie.

However, it was Blues who would have more in common with Pep Guardiola’s team as both ended the campaign with memories of glory at Wembley, winning the League Cup and European Cup respectively.

Barcelona may have had Messi, but Blues had Martins – more on that later.

Saturday marks the 10 year anniversary of our Carling Cup triumph. 🏆

🤩🎨 So to celebrate, today's #WallpaperWednesday is a special one! pic.twitter.com/flw73ayNGE

On the day, in excess of 30,000 Bluenoses descended on Wembley Way, with hordes of royal blue and white-clad supporters dominating the eyeline with their cup-final paraphernalia as they filled eardrums with spine-tingling renditions of Keep Right On.

Many of those in attendance had followed that season’s competition since its infancy, experiencing the fragility and fervour that only knockout football can concoct in such strong yet addictive measures. In fact, whilst Blues approached the tournament’s final hurdle as outsiders, they started it with a trio of matches where they were firm favourites.

And playing with that tag almost struck Alex McLeish’s team down at the opening fence. As a Premier League side, Blues entered at the second-round stage but found themselves behind to League One Rochdale until rallying through goals from James McFadden, David Murphy and Matt Derbyshire. MK Dons were comfortably despatched next as Blues struck three times in four minutes against further third-tier opposition through Alexander Hleb, Nikola Zigic and Craig Gardner.

A more serious scare was avoided in round four. Kevin Phillips’ stoppage-time equaliser denied Brentford successive top-flight scalps with Maik Taylor proving the hero when the game went to penalties.

It was then the tournament got going in earnest.

The last-eight threw up the small matter of a Second City derby and for many, the sensation of that night ranks amongst the feeling of ultimately winning the Carling Cup. On an evening where St. Andrew’s reached fever pitch, Nikola Zigic’s late goal ensured it would be the Blue portion of Birmingham left harbouring genuine ambitions of silverware. 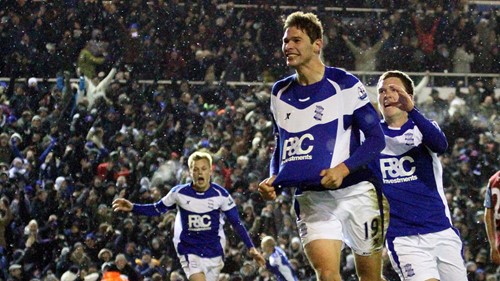 More claret opposition presented itself in the semi-finals and following a testing evening at Upton Park, Blues clung onto Liam Ridgewell’s goal as a beacon of hope as they returned back to B9. Although the optimism this carried was swiftly dissipating when West Ham extended their lead to 1-3 on aggregate in the second-leg.

But the heart of a Blues team is not merely pumped when things are prosperous, instead, it is driven at its most powerful by the desire to rally in the face of adversity.

Two goals in the space of 20 second-half minutes from Lee Bowyer and Roger Johnson were testament to that as the recovery forced extra-time in the West Midlands before a true Blue finished the job.

Hobbling is not typically conducive to succeeding in elite football, although not many in such a position have the opportunity to send their boyhood team to Wembley. So, it was fitting that Gardner’s long-range strike clinched a first trip to the national stadium for a major cup final since 1956. 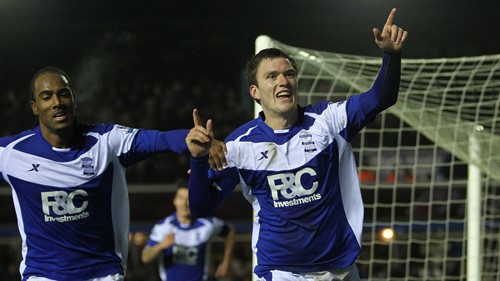 Under the arch, the pre-match formalities were expected, at least by those outside of a Blues persuasion, to merge into an on-field procession. After all, the Gunners had already completed a league double over McLeish’s men who were given a six to one chance of success. Live television coverage described it as a potential “day of destiny” for Arsenal, amounting Blues’ chances to requiring “one of the biggest upsets in League Cup history.”

However, Sky Sports co-commentator Alan Smith remarked that “quite often, the winners are determined by who can settle the best” and so it proved with Blues warranting a penalty inside two minutes. But having been chopped down by Wojciech Szczesny, Lee Bowyer was incorrectly deemed offside.

The sense of injustice was almost heightened when Andrei Arshavin got a shot away, but Ben Foster made his first of many vital saves on an afternoon where he would receive the Alan Hardaker Trophy as the game’s man of the match.

In front of him, Martin Jiránek, making just one of a handful of Blues appearances, ably stopped Robin van Persie when he tried to open up his box of tricks and at the other end, his centre-back partner would soon make an impact.

Peeling off from a Seb Larsson corner, Johnson gave the ball an almighty head towards goal and into an area where Zigic was causing disarray in Arsenal’s defence. The giant Serb flicked the ball beyond a stranded Szczesny, and the Blue half of Wembley rejoiced. 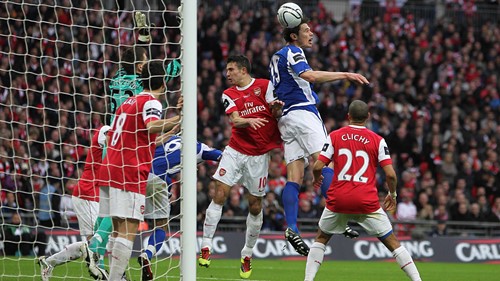 Unfortunately, it was a lead that only lasted 11 minutes and when Arsenal’s flying Dutchman equalised those pre-match sceptics on Blues’ staying power might have been beginning to feel vindicated.

There was an additional setback when the injured Gardner made way for Jean Beausejour, but the Chilean was unrelenting in his contribution and provided the opening for a Keith Fahey effort that left the woodwork, like Arsenal, rattled.

Arsene Wenger’s side were forced to withdraw Van Persie for former Blues loanee Nicklas Bendtner, although it proved to be the introduction of another striker that would leave an eternal mark on the contest.

Obafemi Martins only signed on loan from Rubin Kazan during the deadline day of January’s transfer window and when rewatching the final it is not remiss to suggest that withdrawing the struggling Johnson instead of Fahey for Martins, in a like-for-like change, would have been logical. Instead, the defender, through a grimace, signalled to the bench he would continue and alongside Barry Ferguson – who suffered a fractured rib before the break – played through the pain.

The Nigerian, as it was, fizzed around and looked to feed off second balls with his energy invariably seen as a bonus come the 30 minutes of extra time that ticked ever closer. Ironically, much of this freshness was used evading the swarming of his ecstatic teammates to allow him to deliver his trademark somersault celebration as Bluenoses were sent into bedlam.

With Foster's long ball forward glanced off the ‘towering Zigic’ either Szczesny or Laurent Koscielny could have commanded the situation – neither did. And as the ball slipped into the path of Martins, the arms of Bluenoses crept passed their ears and by the time the most spectacular of simple finishes crossed the goal line they were raised entirely aloft. 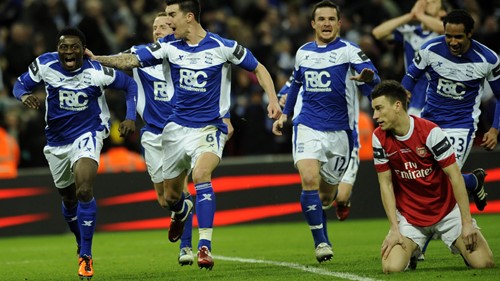 The subsequent four minutes of added time were played against a backdrop of howls, screams and the frenzied whisking of royal blue and white flags, as if somehow the faster they were waved the quicker the referee's watch would spin.

Then, with the ball hoisted into the London sky, three peeps on Mike Dean’s whistle sent Birmingham players and staff screeching across the hallowed turf in celebration’s fuelled by adrenaline and ecstasy that was mirrored in the stands.

The next steps, 107 in total, took Blues up to the Royal Box and, led by Stephen Carr, the players raised their arms in jubilation with many now adorned by scarfs handed to them by supporters. It was then the job of Blues’ skipper to lift the League Cup trophy and send the loyal Bluenoses into further raptures.

Subsequent discussion leaned on Arsenal’s shortcomings, but as The Guardian’s match report reflected: “If Birmingham City held one advantage over Arsenal it lay in the art of endurance…” as, in the essence of the Club’s anthem, they kept right on to the end of the road. 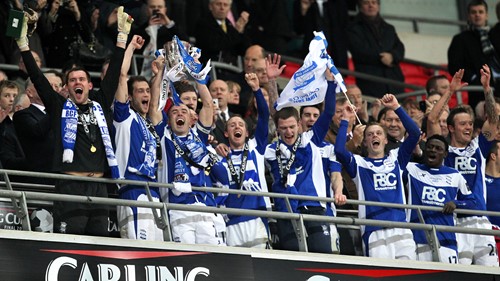