Victory for Blues this weekend could lift them to eighth in the table.

Taking place at St. George’s Park, the 2pm kick-off is the second of three home fixtures in a row for Carla Ward’s team.

Blues were overcome last weekend by an impressive Manchester City outfit at the national football centre but can take great heart from their efforts that frustrated the side second in the table.

This weekend’s opposition, Arsenal, ended February with an emphatic win over Blues’ Second City rivals and face their own neighbours in Tottenham Hotspur later this month.

Victory for Blues this time out could lift them to eighth in the table and to 14 points. 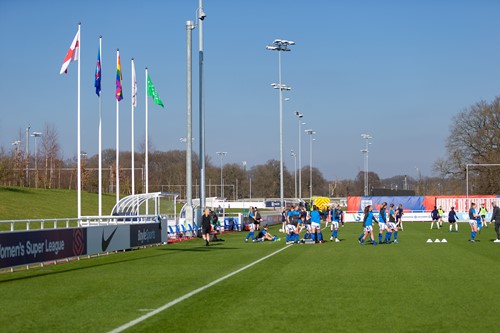 Fourth in the standings, Arsenal are looking to end the campaign at least one place higher than they currently sit to qualify for the UEFA Women’s Champions League – a competition they reached the quarter-finals of as recently as last season.

Under the guidance of Joe Montemurro since November 2017, the Gunners have ambitions of adding to their 15 league titles, of which the most recent was won in 2018-19 with a game to spare. However, this season, Arsenal have failed to beat any of the three teams directly above them in the table. Within the past month, they have lost ground at the top of the division after losing to Manchester City and Chelsea in back-to-back matches.

But this is to not suggest that The Gunners lack firepower. In Vivianne Miedema, they have not only the league's but one of the world’s most prolific strikers and this season she became the first FAWSL player to reach the 50-goal mark in the competition.

She is one of three Dutch players in Arsenal’s squad, a tally that is matched by the Australian contingent at fellow Aussie, Montemurro’s disposal. And it is one from each trio - Caitlin Foord and Jill Roord – that follow Miedema in the scoring charts with seven goals each.

Defensively, Arsenal have conceded the third-fewest goals in the FAWSL with Leah Williamson being a mainstay of this effort. The England international is the youngest player to reach 100 appearances in the club’s history and her composed style has also seen her hit one goal and provide two assists this term.

Blues Women were beaten by Manchester City in their most recent game. Having defended resiliently for most of the first-half, Ward’s side were breached just before the break by a Sam Mewis header. The U.S. international doubled the lead shortly after the interval, with further goals from Lauren Hemp and Caroline Weir meaning Gareth Taylor’s side ran out winners.

Arsenal were successful in their trip to the West Midlands last Sunday. Facing the Second City’s claret contingent, Montemurro’s players hit four without reply after a goalless opening 45 to record their first win in four league matches. There were goals for Miedema, Jordan Nobbs and Lisa Evans, as well as a stunning Katie McCabe strike which was the pick of the bunch.

Blues will be out for revenge after losing away to Arsenal before Christmas.

The Gunners were backed by fans for the first time in nine months but were left frustrated as matters were level until nearly an hour had been played after Hannah Hampton’s first-half penalty save.

However, two goals in five minutes from Foord and Roord did significant damage to Blues’ hopes of landing a result before Kim Little was successful with her second spot-kick attempt to wrap up the points.